This news story originally appeared at Health - Trend Magazine on 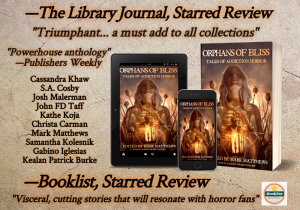 Praise for Orphans of Bliss 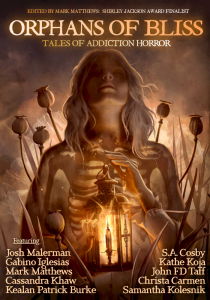 Orphans of Bliss: Tales of Addiction Horror, follow up to the Shirley Jackson Award Nominated volume, Lullabies for Suffering, is now available for preorder.

DETROIT, MICHIGAN, UNITED STATES, April 12, 2022 /EINPresswire.com/ — Wicked Run Press is pleased to announce the upcoming release of Orphans of Bliss: Tales of Addiction Horror, the follow up to the Shirley Jackson Award nominated volume, Lullabies for Suffering. This is the third and final fix in a series of addiction horror anthologies, featuring the insidious nature of substance abuse and its devastating impact, told through dark works of fiction.

Orphans of Bliss is be the biggest anthology yet, with a more diverse table of contents, as well as diverse subject matter. The table of contents includes two New York Times Best-Selling writers, SA Cosby, author of Blacktop Wasteland, and Josh Malerman, author of Bird-Box. It also features USA Today Best-Selling writer Cassandra Khaw and a host of other award-winning writers.

The work has already received tremendous advance praise. Publishers Weekly called it a “powerhouse anthology.” Both Booklist and The Library Journal gave the work Starred Reviews calling the work “Triumphant” and a “must add to all collections.”

Previous addiction-themed anthologies have included writers such as Caroline Kepnes, author of YOU, and Jack Ketchum, author of The Girl Next Door. They have been praised by the likes of New York Times Best-selling writers Jonathan Maberry and Alma Katsu. The series has been featured on publications such as The Fix, the premier addiction and recovery magazine, as well as on Tor.com and the cover of Rue Morgue magazine.

Mark Matthews, the editor for all three anthologies, is in recovery from his own addiction, has a Masters Degree in Counseling, and now works in the field of behavioral health. He has written a series of novels highlighting addiction and mental health issues, all told through tales of horror. “There’s no better way to tell the truth than through a story,” explains Matthews, “and dark truths require dark works of fiction.”


EIN Presswire’s priority is source transparency. We do not allow opaque clients, and our editors try to be careful about weeding out false and misleading content.
As a user, if you see something we have missed, please do bring it to our attention. Your help is welcome. EIN Presswire, Everyone’s Internet News Presswire

,
tries to define some of the boundaries that are reasonable in today’s world. Please see our
Editorial Guidelines
for more information.